View More
Back to blogs

Remembering Father of the Nation hashtag#MahatmaGandhi Ji on his 150th Birth Anniversary, It’s a day to cherish our beloved Bapu who taught the world the value of truth, non-violence, equality, forgiveness & humanity along with other values.

On this special day, we bring you five leadership qualities of Gandhi ji that you can adopt in your management. 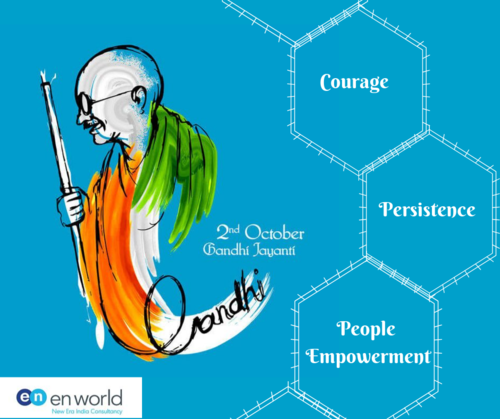 Gandhi's greatest ability was to walk his talk at every level and in every way. He practised what he preached at every possible level. Mahatma Gandhi sacrificed his thriving law practice and adopted a simple life to live among the millions who lived in poverty during his freedom struggle. Often, we as leaders expect our team to remain honest to the work, maintain project deadline but it’s often we fail to accept their honestly.

A critical success for Gandhi was the support he got across the nation. A significant part of this was due to his extraordinary persistence once he had articulated his vision and his methods. His determination in following through on what he preached was often at a cost to his own well-being. So, as leaders, your persistence and your patience go long way. It builds faith and stability in the team as well.

There were quite a number of times Gandhi failed; each time he used the failure to improve his leadership skills and to improve himself and the task at hand. Mahatma shows us that even the best leaders still fail and make mistakes. He also shows that the difference between good leaders and great leaders is that the great leaders acknowledge and learn from their mistakes.

Mahatma believed that challenging his self-discipline heightened his commitment to achieving his goals. He was a focused leader that had a "Do or Die" attitude. He 'would free India or die in the process. Mahatma would do extraordinary things to improve his discipline and commitment.

Leadership is a necessary part of the social process. In fact, in any given situation where a group of people want to accomplish a common goal, a leader may be required. We hope recollecting these skillsets would help you reinforce your leadership.