en world-India along with many achievements has reached another milestone, where a renowned Business & Technology Magazine – Silicon India has taken en world India on its cover page of Special Recruitment issue based on merit.

Silicon India is a business magazine published from Bangalore, which covers business and entrepreneurship. The 25 years old magazine has a reader base of 95,000 across India covering CEO, CXO’s, HR leaders among its reader base.

en world – India is increasingly gaining name among the leading brands for its global working standards. Silicon India has done the cover story where Mr Koji Murata, en world -India CEO talks in length about our philosophy of “en” that is to create connections and how we at en world India believe in taking recruitments beyond the routine with our value-added service ‘Success After Joining’

After understanding and analysing our market brand value, Silicon India has been kind enough to also feature en world India to its list of '20 Most Promising Executive Search Firm in India'. This survey was conducted among 20,000 Executive Search firms in India. Giving credit to en world group philosophy – Total Talent Engagement. Mr Murata added "We feel honoured as such recognition motivates us to remain at the top of our business. We sincerely thank Silicon India editorial Team and we look forward to more such recognition in future as well.” 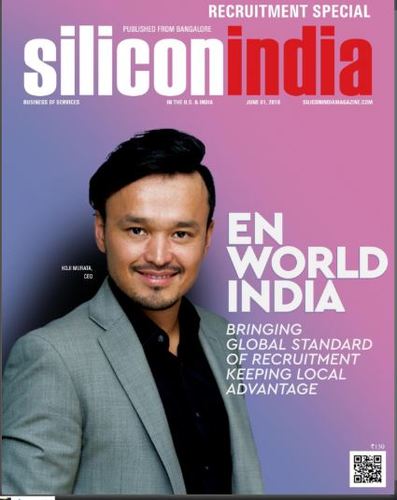